A pinguecula is a benign, non cancerous growth which develops in the eye. The pinguecula is called as pingueculae when it is more than one in number. Basically, the growth is seen on the conjunctiva of the eye which is a thin layer of tissue and is responsible for covering as well as protecting the white part of the eye. People can have pinguecula at any age but generally the condition is observed in middle aged and elderly people. In this article we are going to discuss pinguecula in detail with respect to both modern and Ayurvedic views.

A pinguecula is yellowish in color and particularly has a triangular shape. It is basically a small raised patch that grows close to the cornea. Cornea is a transparent layer which lies over the pupil and iris. It is more common on the side of the nose but can also grow next to your cornea on the other side. In Ayurveda pinguecula is known as balasa graditha and it is described under diseases of shukla mandal. Ayurveda also specifies causes of all diseases related to eyes under one verse. Moreover, the pinguecula does not cause any kind of pain or other symptoms rather than irritation. 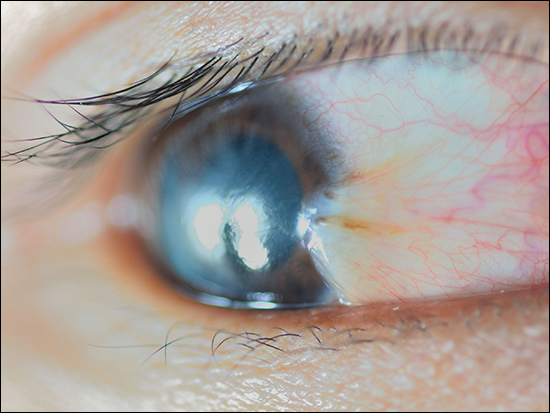 On the Other hand Ayurveda suggests that the causes for pinguecula is the same as the rest of the eye diseases. They are as follows:

According to Ayurvedic texts the pinguecula, also known as balasa gradhitha , grows in white part of the eye that is sclera. It appears like a water drop and has a colour similar to copper. This drop is generally painless and is hard in nature.

Generally, no treatment is done until you have any kind of symptoms. In case your eye hurts, your physician might prescribe you with ointment or eye drops to relieve redness and irritation.

Surgery is considered or suggested when:

In Ayurveda the treatment of balasa graditha is described in following ways:

Bilberry which is also called Vaccinium myrtillus.. This is a single herb formulation and is one of the best medications which is used in the treatment of eye disorders. These capsules are made from pure extract of bilberry.  It has antioxidant properties and is successfully used in treatment of disorders related to retina, cataracts, nearsightedness and glaucoma. Bilberry is also used to enhance night vision.

Dosage : One capsule twice a day after a meal with plain water.

Kaishore guggul has many ingredients like amalaki (Emblica officinalis), haritaki (Terminalia chebula), Guduchi (Tinospora cordifolia), Ginger (Zingiber officinale), black pepper (Piper nigrum) and many others. It is a classical preparation which is being used to remove toxins from the body and also supports healthy blood circulation. The formulation tends to show a rejuvenating effect on the body. This formulation is very popular for its fantastic effects.

It is a classical preparation which has amalaki (Emblica officinalis), haritaki (Terminalia chebula), Vacha (Acorus calamus), Neem (Azadirachta indica), Manjistha (Rubia cordifolia) and many others. The preparation is very useful in enhancing the immunity of one’s body and also helps in reducing any kind of associated inflammation. The navkarshik churna also has antibacterial and antimicrobial effects.

Dosage : Half tsp twice a day after meals with lukewarm water.

Angel eye vitale capsules have ingredients like pure extract of vitamin C, vitamin E, zinc, marigold, corn, carrot seed and bilberry. The formulation is very effective in various eye-related disorders and also helps in enhancement of eye sight. In case of any irritation due to pinguecula, the formulation can be given and is very effective in managing such conditions.

Dosage : One capsule twice a day after meals with lukewarm water.

In Ayurveda the treatment of each and every disorder is possible, all you need is knowledge and belief. A proper understanding of condition and body according to Ayurveda can help you in understanding the situation really well and then choosing Ayurvedic herbs wisely helps in treating disorders really well. Above mentioned products by Planet Ayurveda are totally herbal and organic. In addition they do not cause any kind of side effects. In case of any query kindly visit www.planetayurveda.com