Addison’s disease which is a rare autoimmune disease which was named after the British surgeon Dr. Thomas Addison. It’s a hormonal disorder which occurs when adrenal glands produce insufficient amount of adrenal hormones i.e. cortisol (Glucocorticoids) maintaining blood pressure, heart rate and metabolism and aldosterone on the other hand keep sodium and potassium in balance. Moreover, high potassium causes hyperkalemia and low sodium causes hyponatremia. This disease is also known as Hypocortisolism or Chronic adrenal insufficiency. The rate of pervasiveness is around 0.4% in 100,000 people in all age groups. 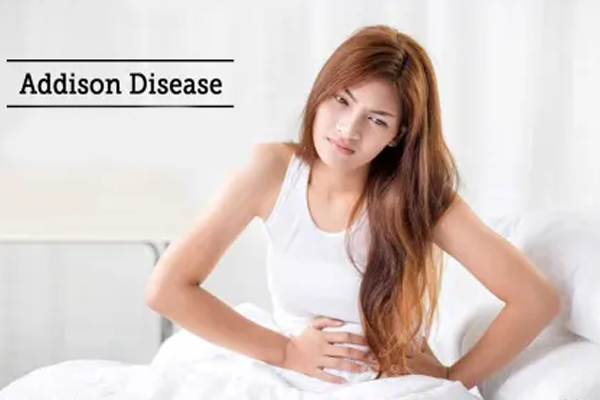 The word Ayurveda incorporates two Sanskrit words i.e. Ayur means life and Veda means science or knowledge. According to Ayurveda, there are three energy channels or Tridosha comprising vata, pitta and kapha dosha which balances metabolism and body functions. It is believed that when Ojas (body strength) declines the affected person experiences fear, worried, weak and mental disability. Ojas is considered to be the main cause for Addison’s disease or adrenal disorder.  Consuming alcoholic beverages (Rukshapna), improper sleep (Prajagara), trauma (Abhigata) and infections (Abhisanga) are the main causes of Ojas.

The lower levels of Adrenal hormones can be classified on the basis of type of adrenal insufficiency. Some of the major causes are as follows –

This is caused when our own immune system start attacking adrenal glands preventing production of adrenal hormones. Some other causes of this kind of adrenal insufficiency are as follow-

This type of adrenal disorder is caused when there is low production of Adrenocorticotropic hormone (ACTH) which is a hormone that triggers the adrenal cortex to produce hormones. Common causes for low production of ACTH are benign tumors, inflammation or prior gland surgery.

As the pattern of disease changing day to day so the medical science, history of medicine has always been a fascinating subject. Modern allopathic medicines are no doubt effective but they only suppress the symptoms and can be preferred only for the temporary relief. Along with its symptomatic nature synthetic steroids have various side effects like leukemia and immunosuppression. Ayurvedic Herbs may show effects slowly but they eliminate the disease from root. Some of the herbs that have proven to be effective for Addison’s disease are mentioned as follows-

Ashwagandha or Indian ginseng which is a medicinal plant which has been used in Ayurvedic pharmacy for more than 2500 years. It possess tremendous health beneficiary properties such as anti-stress, antibacterial, anti-oxidant, anti-inflammatory etc. which improves stamina and stimulates cortisol for producing hormones that helps in treatment of Adrenal autoimmune disorder. It contains various phytochemicals like steroids, flavonoids, alkaloids etc. which helps in restoring hormone levels which reduces inflammation, increasing mental activity, revitalizing the body functions and maintain an equilibrium in levels of cortisol.

Fenugreek which is commonly known as “methi” is a legume and a spice possessing antidiabetic, anti-carcinogenic, anti-bacterial/anti-fungal, anti-oxidant and hypo-cholesterol emic properties which helps in controlling cholesterol levels, heartburn, inflammation and appetite. Chemical and phytochemical constituents of fenugreek like sapogenins, glycosides, alkaloids, flavonoids, lipids, fibers etc. makes it beneficial in rapid production of steroid hormones which treats adrenal tumor (medullary or cortical) and helps in reducing symptoms of adrenal disorders.

Curcumin which is a major component of turmeric and is a traditionally used spice in Indian houses. The recommendable therapeutic beneficiaries of this herb can be correlated with its anti-inflammatory and antioxidant properties. This helps in reducing symptoms like depression/anxiety, muscle or joint pain, reducing LDL-cholesterol levels, maintaining blood glucose and blood pressure. Curcumin triggers adrenal glands to produce cortisol hormones which suppresses Addison’s disease symptoms.

Holy basil which is considered as a sacred plant in India and is worshipped in every house which is being cultivated for over 2000 years in Southeast Asia. Chemical and phytochemical constituents of this traditional herb include Eugenol, Isothymusin, Isothymonin, Polysaccharides, Flavonoids, Zinc and other minerals. Eugenol present in Tulsi is effective in treating cancer, diabetes and cardio-vascular disorders. Being an adaptogen, its anti-viral and antioxidant properties benefits in detoxification of liver, lowering blood sugar, aids memory, sleeping disorders and inhibits growth of cancer cells.

Planet Ayurveda’s products are formulated in highly sterilized conditions and are 100 % pure. Every product is free from fillers, binders, chemicals and preservatives.

Dosage- One capsule two times a day with plain water after meals.

This is natural herbal supplement which is formulated by using rhizobium part of pure curcumin, compound of turmeric. Curcumin is very effective in treating chronic digestive disorders and skin diseases. It possess antioxidants, antiseptic and anti-inflammatory properties which helps in detoxification and treating cancer.

Dosage – 2 capsules two or one time daily with plain water.

Dosage– 1 to 2 capsules two times a day with plain water after half an hour of meal.

How Ayurveda Can Help in Treating Hepatic Encephalopathy?

How Depression Affects our Life? How can we Get Rid of it?