Dermatitis Herpetiformis, the name already shows that it has some connection with Skin. Yes, it has, it is a name given to a skin problem in which there are formation of blisters filled with some fluid on the skin. It is a skin disorder that can be confused with herpes virus as its second word is Herpetiformis. But, let us clear that it has nothing to do with herpes virus, the word is added only because the appearance of the disease seems like herpes, and these are not same. Here, we will discuss about it clearly and its management through herbs in Ayurveda.

What is Dermatitis Herpetiformis?

As a brief introduction is already provided above, so we can say that it is a chronic autoimmune skin ailment in which the fluid-filled blisters appear on the skin. These blisters are itchy. It mostly affects the extensor surfaces such as buttocks, backside neck, scalp, back, knees, elbows, face, groin or hairline. The other name of this disease is Duhring Disease as it was described by Dr. Louis Duhring. It is seen that the patients of Dermatitis Herpetiformis are majorly between the age groups of 30 and 40 years, but still we can’t say that other age groups are not prone to it. Above is the basic introduction of the disease, let us move forward and know about its symptoms, causes and ways to diagnose, so that we can have a proper treatment also.

The symptoms of Dermatitis Herpetiformis may come and go at times, or sometimes may disappear when there is ingestion of gluten which is in favor to its treatment.

The severity of the condition affects the gastrointestinal tract and digestive system leading to some associated symptoms such as:

The symptoms of Dermatitis Herpetiformis are mostly seen in the three different stages.

First stage – Initially, the discoloration of the skin starts to occur

Second stage – After discoloration, papules start to appear in groups

Third Stage – Due to the excess itching and scratching, coming to this stage, the crusts form. This is also the healing stage as it mostly gets diagnosed in the second stage, thus, the skin turns lighter or darker.

The exact cause of Dermatitis Herpetiformis is not found yet but most of the cases are witnessed that it occurs in the patients suffering from celiac disease, and moreover who eat gluten. In this condition, the antibodies are created by the intestines, known as IgA, which triggers the rashes leading to Dermatitis Herpetiformis. 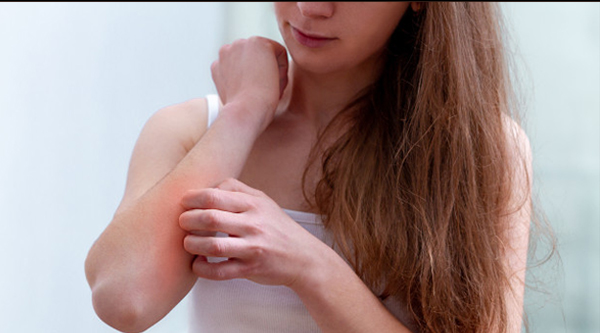 Dermatitis Herpetiformis is mostly misdiagnosed with drug eruptions, eczema, bug bites, contact dermatitis, or other blistering skin disorders. To assure, a blood test and skin biopsy can be done.

Ayurveda, the most ancient system of medicine has preventive measures as well as remedies for the treatment of all diseases. The only need is to believe in it and follow its principles strictly. Planet Ayurveda, which is owned by the Ayurveda expert in the field of herbs who follows all the Ayurvedic principles in a very proper and effective manner, is trying best to serve the people with the maximum benefits of herbs. Likewise, for the Treatment of Dermatitis Herpetiformis, it has some very efficacious herbal formulations that will not only help the affected person get rid of the disease but also to maintain his overall health.

According to Ayurveda, the main cause behind the autoimmune disorders is the accumulation of toxins inside the body. Low digestive fire results in the formation of toxins which are the byproduct of food. Sanjivani Vati is a classical formulation that helps to combat all these health issues by boosting the immunity and burning the accumulated elements. It contains Vidanga(Embelia ribes), Ginger Roots (Zingiber officinale), Pippali (Piper longum), Haritaki (Terminalia chebula), Vacha (Acorus calmus), Guduchi (Tinospora cordifolia), etc. These all herbs work together to soothe skin and eliminate toxins outside the body.

Dosage: 1 tablet twice a day with plain water, after the meals.

Dosage: 1 pill twice daily with honey after the meals.

Gandhak Rasayana is a single herbal formulation from the house of Planet Ayurveda which is prepared using the Shuddh Gandhak (Purified Sulphur). It is also another classical formulation which is mentioned in the ancient Ayurvedic texts as the best remedy to treat skin problems. It also eradicates the impurities from blood and prevents accumulation of fluid in any form. Thus, it can be useful in supporting the Ayurvedic treatment of Dermatitis Herpetiformis.

Dosage: 1 tablet two times a day with normal water, after the meals.

The pure standardized extracts of Manjishtha (Rubia cordifolia), Pit Papda (Fumaria officinalis), Chirata (Swertia chiretta), and Ghrit Kumari (Aloe barbadensis) are used in this herbal formulation. As the name describes this mixture of herbs is potent enough to maintain the health of skin, hair and nails and to prevent the ailments of these body parts. These all herbs are also good for other parts of the body as well.

Planet Ayurveda’s Dermo Plan Syrup is a blend of the most effective herbs for skin problems. The name clearly defines it as a liquid medication for the dermo (skin) problems. The herbs used are Manjishtha (Rubia cordifolia), Giloy (Tinospora cordifolia), Sariva (Hemidesmus indicus), Neem (Azadirachta indica), Haridra (Curcuma longa), Gorakhmundi (Sphaeranthus indicus), and many more. These act simultaneously to support the healthy skin and eradicate any skin problem such as itching, burning sensation, papules, etc.

Dosage: 2 tsp twice daily with plain water, after the meals.

Nirgundi is a Sanskrit words which literally means a substance that safeguards the body against the ailments. It is a multipurpose herb that possesses various properties to help in the treatment of different types of skin diseases as well. The Nirgundi Oil by Planet Ayurveda is a blend of the extract of Nirgundi (Vitex negundo) with some additional herbs like Manjishtha (Rubia cordifolia), Haridra (Curcuma longa), Kalihari (Gloriosa superba) along with Til (Sesamum indicum) Oil. Therefore, it is very effective in the treatment of Dermatitis Herpetiformis. Mixing neem oil with nirgundi Oil boosts their actions and provides better results.

This herbal soap is available in the wide range of herbal products of Planet Ayurveda and is manufactured using various components that are Coconut (Cocos nucifera) Oil, Castor (Ricinus communis) Oil, Cotton Seed (Gossypium herbaceum) Oil, Palm (Elaeis guineensis) Oil, Tea Tree (Melaleuca alternifolia) Oil, and Aloe Vera (Aloe barbadensis) extract. It is a paraben free soap made with the pure natural herbs. Washing the affected areas with this soap, or bathing daily with this not only helps in the eradication of external symptoms in Dermatitis Herpetiformis but also secures the skin against various other infections.

Contact Planet Ayurveda to provide you the costing / ordering and delivery information at – costing.planetayurveda@gmail.com or call at +91-172-5214030 Or Check Website – www.PlanetAyurveda.com

Hence, we have discussed almost all the aspects and details related to Dermatitis Herpetiformis and also provided the best alternative treatment for the same. For more specific details about the disease with respect to your symptoms and to get answers for any of your health queries, we are at your service all the time. Just write to us at herbalremedies123@yahoo.com.

How to get a Toned Skin Naturally?-Cucumber Toner and Rose Toner