Our society is facing too much suffering due to increasing liver disorders and people are running here and there to find a cure. In today’s era people want something that gives positive results but also stays life long. Liver, which is one of the major parts of our vital organ system, gets affected then there are many other systems whose functioning is also altered. Hence a person notices many symptoms related to different systems. Liver ailments generally start by accumulation of fat in the liver due to decreased lipotropic activity which gives rise to fatty liver initially of varying grades. In this article we will mainly discuss the lipotropic activity, its significance in preventing fatty liver like conditions along with the role of yakrit plihantak churna in increasing lipotropic activity and thus protecting liver from many ailments.

The term “lipotropic” was first used in 1935 by best, Huntsman and Ridout. Lipotropic factors are the substances that hasten the removal of fat in the liver and also helps in decreasing the fat deposition in the liver due to their interaction with fat metabolism. The lipotropic agents which are responsible for this interaction are choline, methionine, betaine, folic acid and vitamin B12.In all of these lipotropic agents choline is the most major lipotropic agent that helps in enhancing export of fat from the liver and then the exported fat is used for generating energy. But if there is decreased activity of lipotropic factors then it may result in accumulation of fat and bile in the liver leading hepatocytes towards unnecessary fat deposition and hence occurence of many conditions.

Choline and inositol are compounds of phospholipids and are also required for their synthesis. The other lipotropic factors are concerned with transmethylation reactions and ultimately synthesis of choline. Choline is used to synthesize phosphatidylcholine which is essential for packing, exporting and secreting triglycerides in very low density lipoproteins. Lack of choline is the main reason for development of fatty liver ailment.

About fatty infiltration of liver

Liver is the second largest organ of the body and it also helps in processing nutrition that is being received from food and drinks we have. It also filters harmful substances from our blood and is responsible for production of bile. Fatty liver is a condition in which there is accumulation of fat in hepatocytes which may result in liver inflammation, damaging liver and scarring. Scarring can also lead to liver failure. Fatty liver is also known as hepatic steatosis.

The significance of fatty changes depends on the causative mechanisms and severity of accumulation. It may have no effect on cellular function when mild. But more severe fatty changes can impair cellular function, unless some vital intercellular process is irreversibly impaired, fatty changes experienced by hepatic cells are reversible. Generally this fatty infiltration is the result of increased triglycerides levels diabetes mellitus and mostly due to obesity.

In Ayurveda liver infiltration is understood as Yakrit Roga and is the underlying cause of medoroga (obesity) very often. Moreover ayurveda  explains some types of prameha (Diabetes mellitus) as the result of obesity. Obesity is the result of kapha imbalance. A person having more and more kapha vardhak aahar will face obesity and deposition of fat in between the organs and in the liver is generally observed. This aggravated kapha will stick over the cells as a layer and will destroy their pillu agni thus causing decreased metabolism of lipotropic enzymes which are responsible for utilization and interaction with fat metabolism but aggravates extracellular pitta. All of this process will finally result in fat deposition in the liver due to low lipotropic activity. The fatty liver hence can be understood as a disease or disorder taking place as a result of aggravated pitta due to excess of kapha.

Yakrit plihantak churna is a classical Ayurvedic formulation which has many beneficial herbs. These herbs are potent in enhancing liver functioning, removing accumulated fat in the liver and also are effective in showing liver protecting effects. 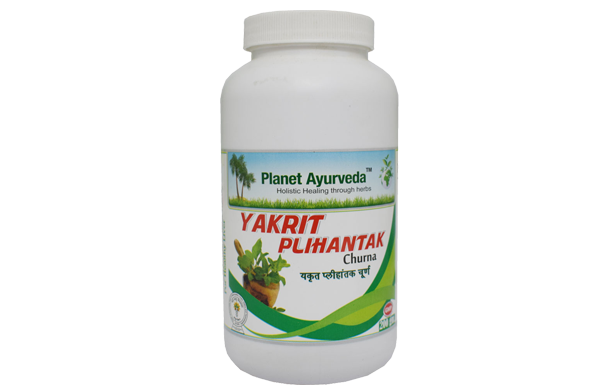 Bhumi amla is a hepatoprotective herb and is also having antioxidant and antiviral properties. Bhumi amla has both pitta and kapha balancing properties. It is tikta (bitter) in taste and hence balances aggravated pitta in this condition. Due to its soothing effect it reduces the layer of deposited kapha over cells and hence metabolises lipotropic activity hence results in good utilization of body fat.

The roots of this plant contain picrorhiza which is a bitter astringent. This herb helps in balancing pitta and also helps in detoxification. Moreover it regulates bile secretion and helps in removing excess bile from the liver as it increases its secretion to the small intestine. Katuki manages blood sugar levels, supports healthy liver functioning and balances both pitta and kapha. It also lowers down bad cholesterol and triglycerides levels and enhances desirable functioning of liver enzymes. Katuki is a rare herb but is considered as the goldmine for good health.

Makoy is also called as kaakmachi in Ayurveda. This herb helps in strengthening the liver and also balances the bile secretion from the liver. Makoy has a chemical constituent known as solanine which is found in all parts of the plant and its level increases as the plant grows. Solanine is a glycoalkaloid which is typically found in the species of nightshade family. This plant is not only having hepatoprotective effect but also has anti daibetic activity, immunostimulant activity, anti microbial activity, anti ulcer activity, analgesic activity and also estrogenic effect. This herb tends to show anti oxidant and anti larvicidal effects also.

Punarnava is found all over India and is especially abundant during rains. It has two varieties, shwetha purna and rakt apurna. The plant is having a typical characteristic white and red coloured roots. The constituents of this plant mainly show diuretic effect but also tend to show hepatoprotective effect. Punarnava is widely used in balancing excess levels of bile and is very commonly used in jaundice. Dhanwantri nighantu has also mentioned that white variety of this herb is efficient in reducing oedema, treats anemia and intestinal colic. It also reduces kapha and pitta. Punarnava balances excess of kapha by its diuretic effect and hence provides room for vitiated pitta to reduce to its pacified stage.

Kalmegh is a plant which is called as green chiretta and king of bitters. Due to it’s bitter taste, kalmegh very effectively pacifies pitta. Kalmegh effectively treats inflammation, allowing the body to fight infections by building strong defense lines, repair damaged tissue and also act as an antioxidant. It removes endotoxins present in the form of fat inside hepatocytes and hence enhances the functioning of the liver. Cheerata is helpful in reducing swelling and soothes hepatic surfaces, repairing its damaged cells and also is an efficient analgesic. Due to its pitta balancing properties it gives good results in managing skin ailments and also controls blood glucose levels.

Kaasni is having a cholagogue effect, which means it promotes the discharge of bile from the system and purging it downwards. Kaasni is very helpful in hepatic ailments like obstructive jaundice, hepatitis and also helps in reducing inflammation. The flowers of this herb are made into sherbet and are given in liver ailments. It’s a liver tonic and is very beneficial in improving liver functioning and hence decreases chances for further accumulation of fat in liver cells.

Sharpunkha has properties like febrifuge property and is also a cholagogue. It is having katu rasa which makes it perfect for kapha pacification. Moreover it behaves as a tonic for the liver and also possess diuretic properties.  This herb also gives wonderful results in biliary system obstruction. Sharpunkha supports liver health very effectively and gives desirable results.

Bhringraj has constituents like alkaloid ecliptine. Its roots behave as tonic for the liver and its leaves have a cholagogues effect.  Roots and leaves of this plant are largely used alone or in combination with ajwain seeds in derangements of liver and gallbladder. These are also used as a substituent for taraxacum which is a reputed and popular liver tonic.

Liver ailments, especially at initial stages are usually symptoms less and do not give tough times to the patient, that’s why most of the times they remain undiagnosed for a long period. In addition, a patient’s ignorance typically in dietary habits leads the patient’s liver towards more damage. If a patient is diagnosed with fatty liver of higher grade at that time also use of yakrit plihantak churna can make a huge difference in the ongoing condition. It is the best classical medication that behaves as a liver tonic and simultaneously is effective in curing liver ailments.

Ayurvedic Treatment for Lymphoma in Dogs