Currently, due to a very fast and busy lifestyle, nobody is having time to give own body sufficient time. Even due to less patience individuals can’t tolerate the problems and go for alternative methods to treat diseases, but everybody has forgotten that the long term use of particular drugs can cause serious side effects on the body. As Liver disorders and HIV are the major problems that threats life, at present they can manage with the use of Tenofovir Alafenamide drug.But nowadays, a very potent formulation is available which is considered as the best alternate of this drug which is totally herbal and free from side effects i.e. Planet Ayurveda Yakrit Plihantak Churna.

As we all know, the liver helps inthe proper functioning of the body. It acts as a detoxifying agent and removes the toxins from the body. If by any means its functioning gets affected, all other systems come to stand still. The treatment of hepatic diseases is still a challenge for modern medicine. There is not a single drug in modern science that can stimulate the hepatic activity without any side effect on other systems. On the other hand in Ayurveda, there are numerous drugs that give a positive result in its treatment by stimulating the regeneration of hepatic cells.

Liver is the engine of the body. It plays a major role in Digestion, maintenance of metabolic functions and detoxification of various exogenous and endogenous encounters/things like antibiotics,infections, medications, and much more. Various homeostatic mechanisms get affected if the liver gets sick. As per Ayurveda, liver is the site of Ranjaka Pitta. It receives the Rasa Dhatu (clear plasma) and converts it into Rakta Dhatu (blood).

According to the latest WHO data deaths due to Liver diseases in India reached 2.95% of total deaths[1].HIV infection and chronic hepatitis B virus (HBV)infections are two major diseases behind this death rate.

HIV (Human immunodeficiency virus) is a virus that aims at the immune system.Untreated HIV infects and destroys the CD4 cells, known as T cells thereby increasing the chances of body getting affected by other infections. It is transmitted through blood,semen, vaginal and rectal discharges. Mother to child infection can pass on during pregnancy, birth or via breast milk. The virus doesn’t spread through casual contact or by water or air.

It’s a lifelong illness. Currently, there is no cure of HIV, however, it can be managed with antiretroviral treatment that will make it easy to live with the disease. If left untreated HIV patients can develop AIDS within a decade. It is the most advanced stage of HIV and reduces the life expectancy to approx. Three years from the day of diagnosis if not managed properly. This makes a person vulnerable to so many other conditions like:-

Hepatitis B is a viral infection that attacks the liver and can cause both acute and chronic diseases. Its virus is most commonly transmitted from mother to child during birth (perinatal transmission)and delivery, as well as through contact with blood or other body fluids i.e. horizontal transmission. Its progression into a chronic infection is very common in infants who get the infection from their mother or before the age of 5 years.

Its virus can also transmit via needle stick injury, tattooing, piercing and exposure to infected blood and body fluids, such as saliva, menstrual, vaginal, and seminal fluids. Its Sexual transmission canoccurinan unvaccinated individual who has sex with multiple sex partners or contact with sex workers.

There is a high risk of HBV infection in patients who have HIV infection. Medically it is advised to start the treatment of hepatitis in HIV infected patients regardless the progression of the disease Tenofovir, which is included in the treatment combinations recommended as first-line therapy for HIV infection, is also used in HBV.

Side Effects of Tenofovir

According to Ayurveda there is a wide range of hepato- protective herbs and their various combinations that have little to no side effect on the body there by saving the hepatic cells from the further damage.The potential Hepato-protective herbs of Ayurveda are Daruharidra, Kakmachi, Apamarga, Bhunimbha, Dughdfeni, Kaasni, Parijaata,Bhumiamla, Katuki, Makoy, Punarnava, Kalmegh, Sharpunkha, Bhringraj, etc.The best combination of these drugs is “Yakrit Plihantak churna”. Its key ingredients are Bhumi amla, Katuki, Punarnava, Kalmegh, Bhringraj, etc. 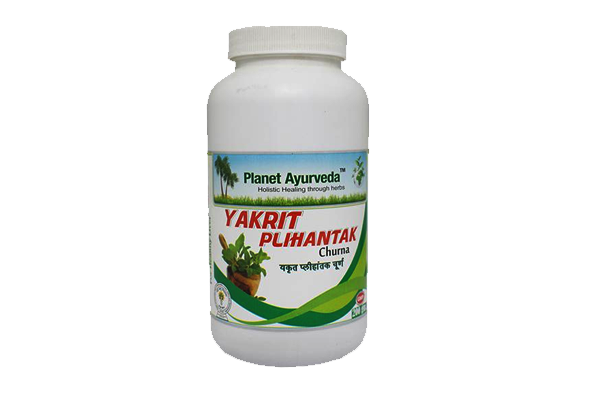 Its fresh root is an effective in treating liver problems such as liver swelling, hepatitis and jaundice. The herb helps in liver detoxification as well as nourishment due to its amazing Rasayana (rejuvenating) and Pitta balancing properties.[2]

It contains kutkin,kukoside and picroliv which are potential hepatoprotectants. The main phytochemical constituent is phenol. It increases bile secretion and excretion.

This herb has been used in liver problems due to its hepato protective action and detoxification that helps to eradicate the free radical scavenger effects.

It contains an alkaloid named as Punarnavine. As per the literal meaning of its name “bring back to life”; the herb rejuvenates the body and makes it as new, by regenerating liver cells and by removing toxicity from the blood.Due to its laxative and purgative properties it is widely used to treat ascites and jaundice. It is an excellent anti-inflammatory and diuretic.

It contains Cichorin, Lactucin and Intybin. It is bitter in taste and has thermogenic, anti-inflammatory, digestive and promotes secretion of bile. It is useful in conditions of vitiated kapha and pitta, hepatomegaly, flatulence,jaundice, hepatitis and much more.

It contains Rutin&rotenoid.It’s bitter and astringent in taste. It has deepan, cholagogue, choleretic and carminative effects. It works as a scavenger in the cases of hepatotoxicity.

It contains alkaloid named as ecliptine. It has deepan&pachan (digestive stimulant) effect and it stimulates the functions of the liver. It increases the production of bile from the liver and its discharge into the duodenum.

By going through both, the modern as well Ayurvedic management of HIV and Hepatitis B, it is evident that Ayurvedic management is much better. It doesn’t hamper one’s quality of life by causing numerous side effects.On the other hand it strengthens one’s immune system thereby preparing them to fight against the infection and also stimulates the regeneration of the hepatic cells.