If you have been reading the news over the last couple of months, then you may be familiar with a new virus that is making its way across parts of Africa and Asia. This widespread virus is called Monkeypox and it has been confirmed in various countries such as Liberia, Sierra Leone, Nigeria, Congo and Cameroon. This suspected outbreak has been confirmed in over 10 countries, the first case of monkeypox was reported in 1970 in a nine month old boy associated with other diseases. Monkeypox is a highly infectious virus that causes deadly diseases in humans that include fever, swelling of the lymph nodes and infects the skin, eyes and respiratory tract as well as the nervous system. Since the ongoing discussions regarding monkeypox have generated a lot of queries and doubts in the general public, what exactly is monkeypox? How can we protect ourselves from this deadly virus? How can it be managed? Let’s discuss the answers to all these questions through the following article.

ALL YOU SHOULD KNOW ABOUT MONKEYPOX

Monkeypox is a disease caused by the Monkeypox virus. This is similar to the diseases that humans have suffered from such as measles, mumps and polio, etc. The symptoms of Monkeypox are very similar to these diseases and it can be spread by direct contact with an infected person or animal. In some cases it has been passed on through handling infected animals (such as monkeys). This can also happen when coming into contact with contaminated clothing, bedding or equipment such as boots, suitcases or outdoor vehicles. The incubation period of monkeypox is usually 6 to 13 days. The incubation period refers to the time period from the onset of disease to the presentation of symptoms, during this phase the person might not show any symptoms but may transmit the disease to other non infected individuals. The spread and symptoms of monkeypox will be described as follows.

HOW CAN MONKEYPOX SPREAD?

As previously stated, monkeypox can be spread from direct contact with a person or infected animal such as a monkey. It has also been discovered that the virus can spread through fluid-filled bumps on the skin or pustules. Monkeypox is a highly contagious condition. There can be various transmission modes. It is known to spread through the skin of an infected person to skin contact with a non-infected one. Monkeypox can spread from mouth to mouth contact or even through mouth to skin contact. One can get infected through coming in contact with infected clothing, bedding, towels, or other contaminated objects. This will lead to the presentation of various symptoms which will be described as follows.

WHAT ARE THE SYMPTOMS OF MONKEYPOX?

The symptoms of monkeypox are very similar to those of measles and mumps, but it is not considered as serious as these diseases. The symptoms of monkeypox may include fever, sore throat and swollen lymph nodes, abdominal pain and diarrhea. The main presentation of the condition of monkeypox is rashes and blisters on face, hands, mouth, genitals, and other parts of the body. The patient may experience headache and pain in different parts of the body. He/ she may also complain of low levels of energy. Muscle ache and backache may also be a complaint from the one suffering from monkeypox. However, some people that get infected will have mild symptoms (such as a rash) and may be unaware that they have contracted the disease. About 10% of people that get infected with monkeypox have been reported to die from the disease (mortality rate). There are many more facts related to monkeypox, some of which will be discussed as follows. 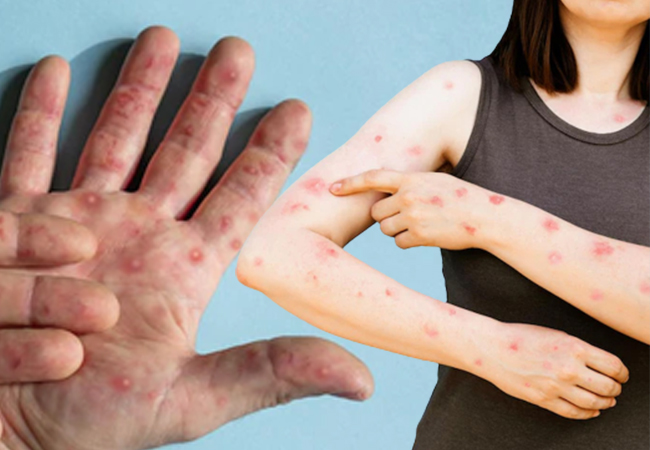 The beginning of health is to know the disease. It is important to have correct information regarding the disease to protect oneself from the disease. There can be various measures that can be followed to protect yourself from this deadly virus. The first preventive measure can be to prevent close contact with an infected individual. Proper measures should be taken to maintain a hygienic environment. Avoid making skin to skin or mouth to mouth contact if someone has symptoms. Properly wash your hands, towels, clothes and objects of regular use. Wear a mask if you are dealing with clothes or articles of an infected individual.

If you are infected with monkeypox, you should try to avoid social gatherings and take necessary measures so as not to transmit the infection onto other people. Always wear a mask and avoid touching objects. Maintain proper sanitation and isolation to prevent transmission to the closed ones. Urgent medical attention should be provided. The condition of monkeypox is required to be managed properly with medicines. If you show any of the above symptoms, it is important to see a doctor immediately. Be sure to tell your doctor about your recent travel history and if you have been in contact with a person or animal that has or may have had monkeypox. A person that is infected should be isolated from the public and avoid direct contact with other individuals until further medication has been prescribed.

The condition of monkeypox can be correlated to the agantuj vyadhi i.e. vitiation of sharirik dosha due to an external causative factor. The balance between the sharirik dosha i.s. vata, pitta, kapha is responsible for the healthy state of the body, while any hindrance in this will lead to the diseased state. In the condition of monkeypox, there is dushti of all the three dosha but the pitta dosha seems to be more aggravated leading to various symptoms such as rise in body temperature, blisters and rashes on various regions of the body. It can be correlated to heen vyadhishamtav i.e. reduced immunity. So, to cope up with this condition, various ayurvedic formulations can be used such as curcumin capsules, maha sudarshan kwath, etc. These ayurvedic formulations will be explained as follows.

Planet Ayurveda provides various preparations of natural herbs such as curcumin capsules, maha sudarshan kwath, etc. which are prepared using authentic ways and provide great results in improving the condition of monkeypox. These formulations contain beneficial ayurvedic herbs and are prepared strictly according to the procedures described in the samhitas (classical texts) and therefore are very effective in promoting the health of the patient and managing the diseased state effectively.The ayurvedic products beneficial for improving the condition of monkeypox are described as follows 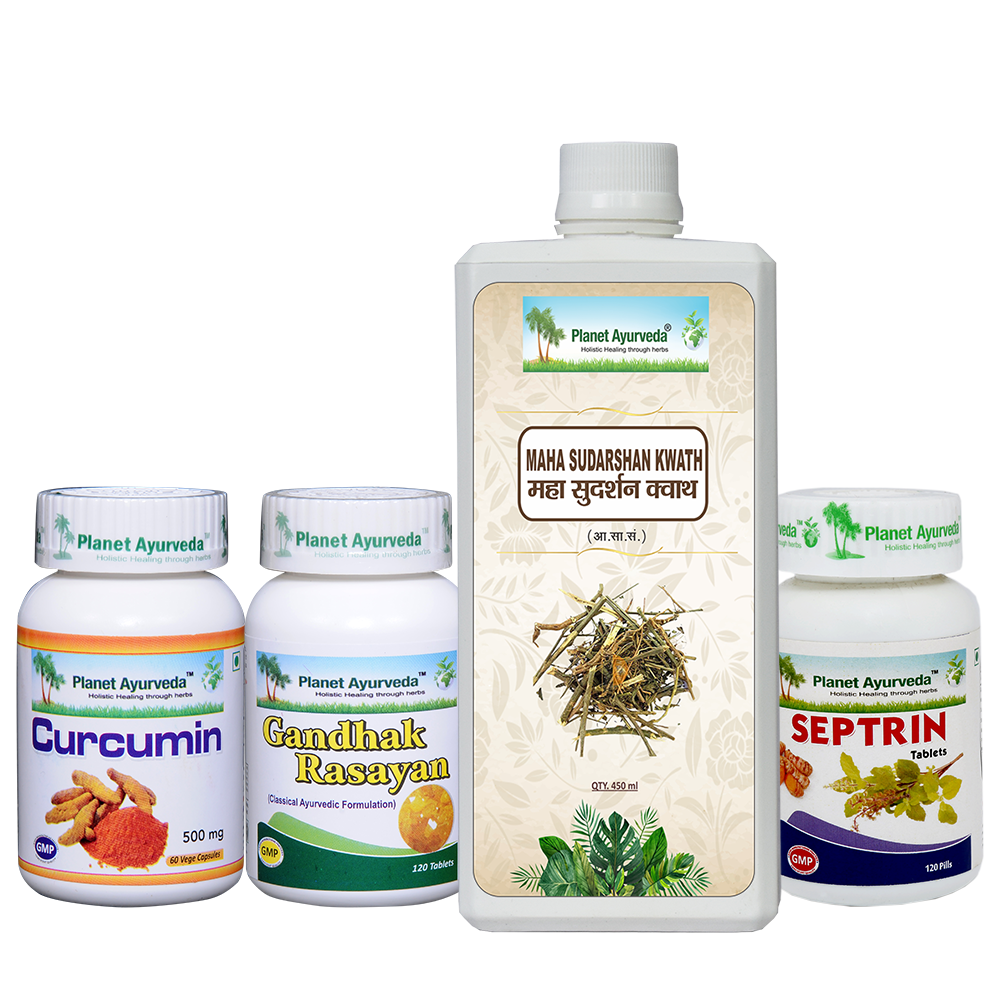 Dosage – One capsule two times a day, after meals.

Septrin tablets prepared by Planet ayurveda contains natural extracts of various health benefiting ayurvedic components such as guggul (Commiphora mukul), tulsi (Ocimum sanctum), marich (Piper nigrum), etc. The combination of these herbs will help to fight off the disease-causing pathogens and establish the hindered equilibrium between the dosha, hence bringing back the healthy state. It promotes a healthy digestive system and a healthy respiratory system also. Hence, it helps to improve the overall condition of the patient with monkeypox.

Dosage – One tablet two times a day, after meals.

Gandhak Rasayan is an Ayurvedic formulation presented by planet ayurveda. It is prepared using pure extract of a very beneficial ayurvedic component namely gandhak (Sulfur (purified)). It shows great results on the overall health of the body. It helps to detoxify the blood of  the body. It acts as an antibiotic and anti-inflammatory agent. Hence, will help to improve the condition of monkeypox. It is also beneficial in various other skin related disorders such as urticaria, acne etc.

Dosage – One tablet two times a day, after meals.

Contact Planet Ayurveda to provide you the costing / ordering and delivery information at – costing.planetayurveda@gmail.com or call at +91-172-5214040 Or Check Website – www.PlanetAyurveda.com

In a nutshell, it can be concluded that Monkeypox is becoming an alarming condition and strict measures should be taken to deal with the situation. The foremost measure would be to isolate the infected ones, so that the infection does not spread. Then appropriate medical attention should be provided to the patient through the ayurvedic herbal formulations to stabilize his/her condition. This will help to manage the diseased state effectively.

UBTAN FOR THE WINTER BRIDES AND HER MATES