Brain is one of the most important parts of our body. Brain controls all our feelings, thinking, actions and helps us to remember things. So, the brain works as a CPU of a computer which controls all the body and rest of the nervous system. It is the head of the whole body’s network system that receives the information , processes it and passes it to different body parts as per the requirement. This process is further supported by the spinal cord which contains thread-like structures called nerves. But, when these nerves are adversely affected due to any reason, they end up resulting in many disorders like Dementia, Parkinsons and one of the rare to find is progressive supranuclear palsy. Let us discuss this rare but serious disorder and its management through natural herbs.

Progressive Supranuclear Palsy (PSP), also known as Steele-Richardson Olszewski is an uncommon brain disorder which creates serious problems like Imbalance while walking or inability to control eye movements. All these are caused due to damage of the nerve cells. PSP is also known as “Parkinsonism” due to presentation of similar symptoms but there is a difference between Parkinson and PSP. Parkinson is caused by the decreased levels of dopamine whereas PSP shows many more abnormalities.

As PSP is a very rare disorder, its symptoms are also uncommon.

Due to difficulty in swallowing, the patients of PSP may find it difficult to swallow food or they might even choke while eating anything, which makes it difficult for them to breathe. This can put them into a dangerous situation. Imbalance in walking makes them more likely to fall which further may result in serious injuries.

The main cause is still unknown but there are some of the reasons like the degeneration of cells in the brain, which helps in our physical movements and others as follows:-

Supranuclear palsy is difficult to diagnose but there are some examinations which can help in diagnosing this in some or more cases: 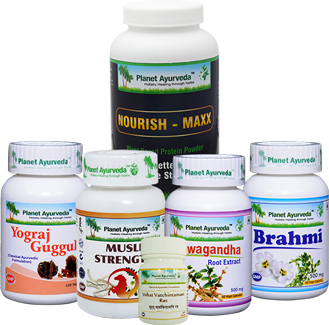 Ayurvedic treatment includes the use of pure herbs which help the patient naturally in improving memory and boosting brain power. Planet Ayurveda provides herbal medicines like Musli strength, Yograj guggul, Ashwagandha, and others for this purpose. All these medicines are 100% pure and vegetarian, free from any chemicals and certified with all the quality standards worldwide. They do not show any side effects, instead always positively affect human health.

It contains the pure extracts of Safed musli (Chlorophytum borivilianum), and Gokshura (Tribulus terrestris). Both of them serve as a tonic for the nervous system and improving the Brain functioning. It also helps in reducing the impotency and enhancing the quantity and quality of sperm count. It helps in uplifting the stamina of a person.

It is prepared using the standardized extract of herbs like Guggul (Commiphora mukul), Chitrak (Plumbago zeylanica), Pippali (Piper longum), Ajwain (Carum copticum) and others. These herbs are useful in removing the toxins from the body, rejuvenating and strengthening the skeletal and neuromuscular system.

Dosage:– 1-2 tablets twice daily with plain water, after the meals.

It is the herbal medicine which is made up of the extract of Ashwagandha (Withania somnifera), also known as “Winter cherry”. It helps in balancing Vata dosha  in the body. It acts as a nerve tonic and enhances mental stamina. It is useful in conditions like fatigue, stress, anxiety and nervous breakdown. It has proven to be a good remedy for brain disorders.

Dosage:- 1 Capsule twice a day with plain water, after the meals

Nourish maxx contains herbs like Shatavari (Asparagus racemosus), Safed musli (Chlorophytum borivilianum), Ashwagandha (Withania somnifera) and Gokshura (Tribulus terrestris). It nourishes the whole body especially neurons which helps in the healthy brain functioning. It is a pure plant based protein powder which is considered as the best supplement for fulfilling the protein requirements of the body. It also helps in boosting immunity.

Brahmi Capsules are manufactured using the pure extract of Brahmi (Bacopa monnieri). It is the best brain tonic being used for centuries. It increases the coordination between the brain neurons and helps to improve memory. Thus, it helps in brain related ailments like vertigo, anxiety, stress, etc. including symptoms of PSP.

Dosage:- 2 capsules twice daily with water, after the meals.

Dosage:– 1 tablet once or twice daily to be chewed with milk.

As mentioned above, PSP is a very rare disease but that does not mean, it can be ignored. Ayurveda can help in treating Progressive supranuclear palsy with the help of natural herbs that not only combat the symptoms, but also restore and rejuvenate the entire health. All the herbal remedies described here treat the disease without any side effects and support the mental health effectively

Natural Tips for School Kids to Prevent Depression and Loneliness

Consequences of High CPK Test and its Herbal Treatment